Children may see that some people won’t associate with those from different ethnic or “racial” backgrounds. They see that women are sometimes treated differently than men.

Children may overhear others being put down because of their ethnicity, gender, sexual orientation, or physical or mental difference and conclude that this is the way it is supposed to be. Prejudice is also learned by watching television, reading books, and going to movies where minorities, women, the disabled, and others are placed in stereotyped roles. 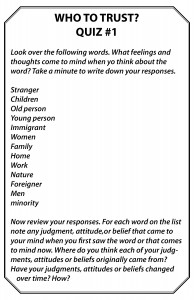 We may be completely unaware of perceptions we adopted while growing up and accept some perceptions as “facts” without ever questioning their validity.

What advice would you give to a younger you?

Often, our perceptions and beliefs about others may have never been challenged, and so we assume that they are correct. We even screen out other, contrary information unintentionally if it conflicts with our beliefs. In general, most people tend to:

Do you ever act, think or feel differently than your family, friends, schoolmates, and neighbors? 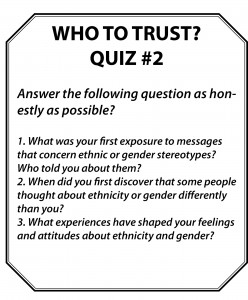 Perception & stereotype can be closely related. What we perceive may be affected by generalized statements that we have heard and internalized. For example, I heard and internalized as a child that men and boys were interested in cars and liked to fix them. The perception that all men like cars is an over-generalization, or stereotype. I have learned as an adult that some men are not interested in and do not like to fix cars. If I continue to treat all men as being interested in and wanting to fix cars then I am acting on this stereotype and behaving in a prejudiced manner. In the same way, expecting all women to want to care for children, or all Hispanics to speak Spanish is holding a stereotype. Acting on stereotypes is prejudiced behavior.

It may be difficult to change beliefs that no longer serve us ot that prevent us from getting to know others. We can, however, learn to act, think and perceive differently than the ways we were taught while growing up. Part of changing our perception is learning how to appreciate differences instead of fearing differences. Learning that others may see things differently than we do gives us an opportunity to really examine ourselves. Looking at why we think and act the way we do helps us to understand what motivates others and may help us in our struggles to live together in harmony.

Why is it always Us versus Them? What is it that divides us? Perhaps if we could walk a mile in another’s shoes, and they in ours, we might all learn to get along a little better.

What does your name mean to you?

Is there any special story about how you got your name? Do you have a nickname and how did you come to get it? Does your name tell anything about your background or family? Have you ever changed your name? Why or why not? Could changing your name affect how you felt about yourself or how others treated you?