Statistics show just how dramatically population groups have changed in the U.S. and the impact of the changes on our work and home lives. In 1965, the average employee was a 29 year old man. He was white, married, and had fewer than twelve years of education. Today the most common employee may still be white and male, but he’s in his early forties, and has been to college, and many more of his coworkers are women and/or people of color.

According to the U.S. census bureau, in 2008 67% of Americans were white non-Hispanic, 14% Hispanic, 13% black, 5% Asian, and 1.2% were Native American.  Additionally, the Department of Labor reports that 83% of adults today age 25 or over have a high school diploma, and 24% have a college degree.  And our population has aged overall according to the Bureau of Labor Statistics.

Although more women and minorities are participating in the workforce and hold governmental positions, the infrastructure of our society is still based on the out-dated model used in 1965. Women earned 59.9 cents for every dollar a man earned in 1965. That decreased to 56.6 in 1973, according to National Committee of Pay Equity. As of 2012, women’s earning had finally increased to 76.5%.  The Wage Gap by Gender and Race  shows black men’s earnings have remained flat. In 1975 they earned 74.3 cents for every dollar earned by a white man. That increased imperceptibly to 74.5 in 2010.

What is it that makes us unique? Perhaps looking inside first and gaining a greater understanding of who we are will help us to look at others with more clarity and understanding.

Test yourself with two short quizzes designed to give you some idea of your uniqueness. 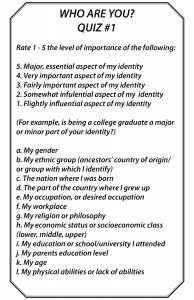 Did you notice any patterns or repeated categories in your answers to quiz #2, such as: family & friends, work & leisure, money & power, etc.? What would you call the items on your list if you didn’t call them values? (Desires? Goals? Beliefs? Issues? Others?)

When we take time to think about it, we often find that it is really not difficult to name those parts of our identity that are most important to us.

Most people are well aware of what it is that makes them unique and sets them apart from the majority. We see this in the groups we join. For example, white women tend to focus on being a woman, minority men tend to focus on being a minority, but we fit into more than the obvious categories. Many of us are unaware of other, less-than-obvious aspects of our identities and how they connect us to others who might look or act differently or might not be a part of our group.

Those aspects of ourselves that are unchangeable have been identified as primary dimensions by Loden.  These are the things that people may make assumptions about before getting to know us like age, race, and gender. Stereotypes based on a primary dimension can be very painful for people at whom they are directed.
People are often much less sensitive about secondary dimensions because these are areas over which we might have some power to change. People can also choose whether or not to disclose this type of information. Secondary dimensions include income, education level, religion.

Understanding the primary and secondary dimensions of our identity helps us understand that diversity is more than race, gender, or age; instead diversity is found in our uniqueness, those things that make us who we are.

What makes you unique?

Are the Primary aspects of your identity what make you unique, or the Secondary aspects? Now that you’ve taken a long look at who you are, take a look around you. What makes those around us unique? Can we assume we know someone based on our perceptions of primary aspects of their identity? Perhaps we are all as different as our fingerprints.