The quantum world is weird and illusive. Is it a trick of the light that scientists can’t determine if ours is a world of waves or particles?

When Ice melts in your hands and pools at your feet, do you question that it is water slipping, dripping through your fingers? Are you even surprised by its metamorphosis?

Just as water can be observed in more than one state, matter, in general, can apparently change states. The double-slit experiment shows that small matter is a wave until the wave becomes a particle; the wave changes to a particle, apparently, through participation with an observer.

Bruce Rosenblum and Fred Kuttner in their book, Quantum Enigma describe the puzzle this way:

“A small object is sent into a pair of well-separated boxes. Looking into the boxes, you always find the whole object in a single box, and the other box empty. According to quantum theory, however, before the object was observed, it was simultaneously in both boxes, not wholly in a single box. An interference experiment, which you could have chosen, would have established that. By your free choice, you could establish either of two contradictory prior realities.”

How can something be in two boxes at once? A wave can be in more than one place, but a particle is in one place only, right?

The is it a wave or is it a particle question still disturbs physicists in the 21st century, almost a century after the discovery of quantum mechanics. The main problem remains: does the wave collapse to a particle due to observation? What counts as an observer? Does the wave collapse at all? Could something else explain the quandary posed by the double-slit experiment?

The different possible answers give rise to many interpretations of quantum mechanics: Copenhagen, Many Worlds, Relational Quantum Mechanics (what I like to call Quantum Linguistics), Consciousness Causes Collapse Theory, Objective Collapse (Orch OR), and lots of others. (By the way, many perspective-altering thinkers weren’t physicists at all, but just interested folks like you and me.)

Here is a summary of some of the ideas floating around out there. Look them over, read more, and draw your own conclusions. Apparently, anything is possible, even if not very probable.

The Copenhagen interpretation recognizes that the wave collapses and becomes a particle due to measurement/participation of an observer. That observer could simply be a Geiger counter. John von Neumann proposed that “the entangled state of the object and the instrument collapses to a determinate state whenever a measurement takes place.”

This interpretation raises questions about what, or who, observes the measurement, and if the observer caused the collapse. Could a cat, like the one in Schodinger’s cat experiment be an observer?
Not according to adherents of the Copenhagen interpretation. Instead, they draw a clear line in the sand between the microscopic world of particles and the macroscopic world our big bodies stumble around in; and they put the cat in the category of inanimate object, rather than conscious creature.

Unlike most interpretations of quantum mechanics, Copenhagen ignores the quandary presented by the wave-particle chicanery demonstrated in the double-slit experiment, and also ignores consciousness, focusing on math alone. It is also the interpretation accepted by most physicists.

But the Copenhagen interpretation loses validity because we are now able to put into superposition larger things. “Physicists at the University of California, Santa Barbara in 2009 demonstrated a quantum entanglement between two objects big enough to see with your naked eye.” Bruce Rosenblum and Fred Kuttner in their book, Quantum Enigma assert that the line has blurred between the microscopic invisible world, and the macroscopic world we notice. “Since quantum weirdness is today seen with larger and larger objects, the ignoring gets harder, and other interpretations proliferate.” 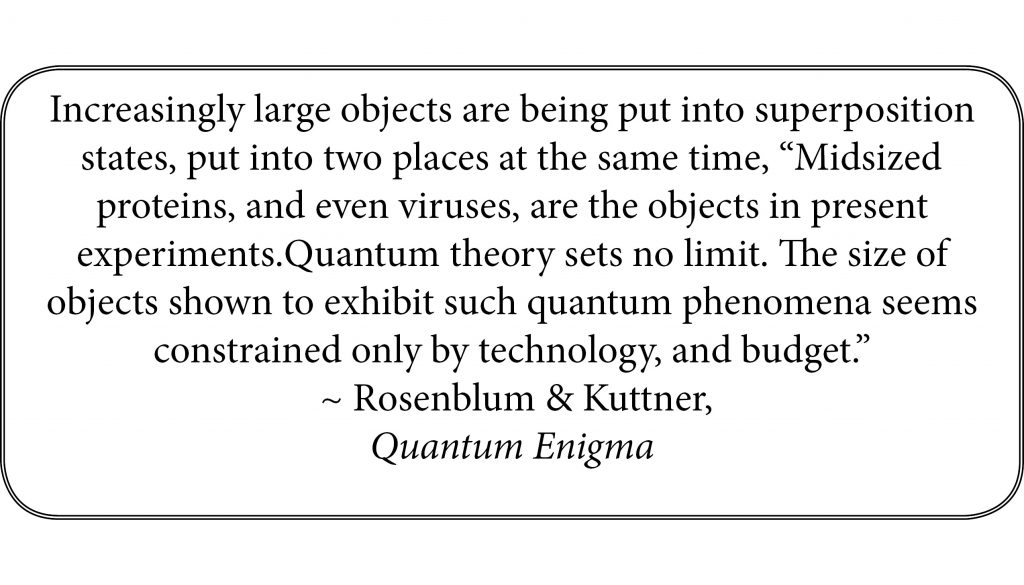 Physicist Hugh Everett was unhappy with the whole wave-collapses-into-a-particle idea. Everett believed there was no collapse. Instead, he proposed what he called “pure wave mechanics.”
Pure wave mechanics means, essentially, that everything is possible; there is no single collapse of wave to particle due to observation/participation. Instead, there are a slew of possible collapses or “branches”—Schrodinger’s cat is both alive and dead and every other imaginable possibility is real somewhere. We see only one outcome in our view of reality, while our many parallel selves observe other outcomes in other parallel universes within our unfathomable multiverse. Whew! Makes me dizzy to think about the Many Worlds Theory. Maybe one of my parallel selves can figure it out.

According to Rosenblum and Kuttner, the Many Worlds interpretation of quantum mechanics suggests that we are all in superposition all of the time. But physicist Roger Penrose doesn’t buy it. He doesn’t believe that the Many Worlds theory is a theory at all because, in spite of this interpretations popularity, in order for it to work mathematically there would need to be 10 to the 500th power possible outcomes. What do you think? Are there 10 to the 500th power slightly different copies of you running around somewhere? 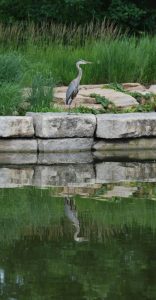 Perspective is everything, or so says Relational Quantum Mechanics. Are you looking at an object from above, from the side, or from directly in front of it? RQM posits that the “state” of the object is determined by the relationship between the observer and the observed. RQM has less to do with matter than relationships between matter.

To a linguist, this sounds quite like Semiotics, the study of how meaning is created from signs and symbols. The linguistic branch of Semiotics identifies the observed, the observer, and the relation between, (and yet all are one. Aum.) A semiotic relationship appears to be described by the RQM interpretation of quantum mechanics.
For example, just as an anthropologist cannot “observe” a society without impacting it, participation in the material world impacts reality. (And yet, one’s participation does not necessarily “create” reality—there are many observers and together we participate.) RQM presumes that one observer may see a dead cat while another observer sees a living cat in Schrodinger’s box, depending on perspective.

The language of quantum mechanics is still unknown to us, yet each small step—each cypher—takes us closer to understanding the workings of the quantum world. And while Semiotics on its own will make you cross-eyed, and so will trying to understand quantum mechanics, perhaps when you put them together you can see!

The outcome of Schrodinger’s Cat experiment is still unresolved. Schrodinger demonstrated the evolvement of two possibilities leading to superposition. The question remains: can consciousness collapse the wave function to a particle? Until then, does it stay in superposition (is the cat both alive and dead)?

Eugene Wigner threw a wrench in Schrodinger’s box when he suggested adding a step and beginning the cat experiment when Wigner enters the room where the box with the cat is stored. Wigner then discovers his friend has just opened the box. Does Wigner open the door and see a happy friend and a live cat, or a sad friend and a dead cat, or perhaps a dead friend and a happy cat? Is the friend in superpositon, too? Where does it end?

Wigner believed a measurement made with a mechanical device created a different result than a person’s conscious observation. Based on this, he concluded that consciousness is not material. Now known as the “consciousness causes collapse interpretation,” Wigner wrote about his views in a collection of essays, Symmetries and Reflections; “Remarks on the mind-body question.”

Henry Stapp researching in the 1980s followed up on Wigner’s ideas. Stapp determined that “activities of the brain” are influenced by our conscious intentions. Any intentional decision for action occurs before the action itself. “Before there can be a collapse there has to be an action on the part of the person whose going to have the experience.” Stapp concluded that conscious experience has a physical—quantum—counterpart.

Stuart Hameroff, Anesthesiologist and collaborator on the theory of Objective Collapse, elaborates:

“Many are familiar with the idea of large objects causing large spacetime curvature. Einstein had predicted that the spacetime curvature of our sun would bend light from stars, distorting their perceived position e.g. in special cases making them visible when in fact they lay behind the sun from our vantage point. Some 50 years after this prediction, Sir Arthur Eddington made the critical observations during a solar eclipse to prove Einstein’s hypothesis. However the idea of small, quantum objects causing small spacetime curvatures was put forth by Penrose.”

He says superposition creates a “blister” in time because it creates, “simultaneous curvatures in opposite directions. Each side of the blister becomes a separate universe. But these blisters are unstable and collapse, “somewhat like bubbles in a bubble bath will eventually reduce, or collapse to one particular curvature or the other. The instability is inherent in the properties of spacetime geometry (quantum gravity) and constitutes an objective threshold for an isolated quantum state reduction, hence “objective reduction (OR).”

So, large things like people can’t stay in superpositon because quantum gravity doesn’t allow it. The superpostion state continues until the difference of space-time curvature attains a certain level, then it reduces to one location or another in a specific time scale. Big old macroscopic systems (like humans) differ from microscopic systems (like electrons) in how they are impacted by quantum gravity. Little bitty things might exist forever in superposition, never collapsing unless the energy difference becomes large enough.
Where does the superosition occur? Hameroff and Penrose have identified the physical component of the quantum action: microtubials within the brain doing quantum computations.

Hameroff explains how this works in his article Consciousness, Whitehead and quantum computation in the brain: Panprotopsychism meets the physics of fundamental spacetime geometry:

“Imagine you briefly see a woman’s face, is it Amy, Betty, or Carol? During the pre-conscious superposition phase there are quantum superpositions of all 3 possibilities which then reduce/collapse/choose one particular possibility at the moment of OR (“Aha, it is Carol!”). Or you are studying a menu deciding what to order for dinner, and have e.g. superpositions of shrimp, sushi or pasta. After time, you reduce/collapse/choose and decide “I’ll have sushi”! The preconscious superposition phase may also be equated with the Freudian sub-conscious including dreams and perhaps altered states.”

I think I’ll go have sushi with Carol and ask if she can help me figure all of this out. My microtubules are sore!

Does quantum mechanics reveal a “trick of the light?” Is it a wave or is it a particle? These six ideas briefly reviewed are just a few of the many floating around out there that attempt to explain the wave/particle dilemma. By considering these theories, and others, we may find resolution(s) for the apparent conflict between physical determinism (no free will) and our ability to respond (responsibility) with conscious choice.