Is consciousness like cruising in a canoe on a calm river that gently flows in one direction? Or is it more like a jet-ski ride where we leap over the water’s surface and then slap down again and again like a zig-zagging bull-frog?

In these discrete moments we interact with the quantum field. Imagine the quantum field as an ocean of waves where the tips of the waves represent physical reality and everything else potentiality. In this view, our perception of the material world is just the crest of a wave in the sea of possibility, and consciousness is an act of riding the waves.

Hameroff and Penrose collaborated on their interpretation of quantum mechanics, Orchestrated Objective Reduction, or Orch OR. Hameroff asserts in his article, How quantum brain biology can rescue conscious free will, that neural oscillation (repetitive neural activity in the central nervous system) at forty hertz appears to be the level associated with consciousness. Neural oscillations (popularly called “brain waves”), like sound frequencies, are measured in hertz, or cycles per second.

Hameroff explains, “If you go back to the Buddhist texts…meditators were able to count flickerings in the nothingness…and somehow counted, I think, 6-1/2 million in a 24 hour period. If you do the math it turns out to be right in the high gamma frequency range, gamma synchrony, let’s just say 40 hertz which is typical, is the best marker of consciousness.” This suggests consciousness consists of about 40 frames—or flickerings of awareness—per second. 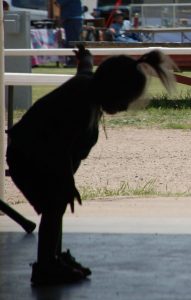 A test of this occurred when the Dalai Lama was asked to select Tibetan monks to be studied at Davidson’s lab at the Stevens Institute of Technology. Hameroff explains that when these “experts” meditated they experienced 80 to 100 hertz, or conscious moments per second. Apparently, people who meditate may have more conscious moments—may be more aware—than the rest of us.

So what happens below 40 hertz? This used to be thought of as the threshold of conscious awareness—below 40 hertz and you were “out”—but studies have shown that people who were presumably unconscious had brain waves with a frequency around 40 hertz.

So, how does an anesthesiologist knows you’re “under” so the surgeon can start cutting? The answer to this question lets us know just how far we are from understanding what consciousness is or how it works. Currently, they do EEGs and look at brain waves, poke you to see if you respond to pain, and look at your eyes, and while usually safe and accurate, it is still guess-work. Anesthesiologists can’t directly measure consciousness, so they don’t know for sure.

There is no explanation for a threshold or transition from non-conscious processes to consciousness itself, admits Hameroff.
What they do know is that when you’re anesthetized your brain is still working but YOU are (hopefully) not there. Where do YOU go? If you believe, as some materialists do, that consciousness is a product of algorithmic brain action, then YOU disappear! In the dualist view, when consciousness stops you may be separated from your body. Some folks upon awakening from anesthetics report having been on the ceiling looking down on what was happening!

If the brain is only a biological computer doing algorithmic processes, then it makes sense that when you are unconscious your brain stops. But, in fact, the brain is still busily working even when we are not conscious.

Dr. Penrose insists that consciousness is more than mere algorithmic processing.  He points out that regardless of complex computer algorithms, robots can’t experience consciousness. And in spite of our human brain’s inability to compete with a super-computer’s speedy computations, we are able to understand, and therefore solve problems that computers will never “get.”

There are things computers simply can’t comprehend, like our experience of pain, love, pride, determination, intelligence, disgust, and will. Computers can’t even comprehend the seemingly simple perception of the color red. And there are things computers can’t compute that human’s can, for example tiling. Penrose asserts that a computer, or computer controlled robot, is not capable of genuine intelligence because intelligence requires understanding which requires awareness.

If it is not a matter of more neurons firing, or of speedier computations, then what does create conscious awareness? What is this physical process?

Penrose & Hameroff propose a quantum solution to the problem of consciousness. They think there is a correlation between “the multiple possibilities of quantum superposition [Schrodinger’s cat] with multiple subconscious, or pre-conscious possibilities ‘collapsing’ to distinct choices or perceptions.” In other words, consciousness is quantum, and when you’re unconscious it is because the quantum activity in the microtubules in your brain slows or stops, and at that time consciousness ceases to be active in your brain; but perhaps it continues to be active elsewhere…

Penrose proposes that quantum action within our brains creates consciousness because it connects us to the intrinsic proto-consciousness embedded in the universe. “Platonic” information is embedded within spacetime geometry and has been since the Big Bang. Where the rubber hits the road—where the quantum activity occurs in the brain—is within the microtubules, and that is where/how we connect to this Platonic information.
Penrose correlates the connection between the Platonic mathematical world, the physical world, and the mental world with our search for Truth, Beauty, and Morality.

These three worlds may seem separate, but there are profound connections. Matter is dependent upon math, he says, and consciousness upon matter, and math upon consciousness, “there’s a sort of circularity to it,” Penrose asserts.

The Orch OR interpretation of quantum mechanics, “incorporates neuroscience and psychology along with physics and philosophy to produce a complete theory. The theory may be wrong, but it is testable and hence falsifiable—the type of comprehensive unified theory which will be required to explain the enigmatic features of consciousness.”

You may discover food for thought in this new interpretation of consciousness. It suggests that we can become more alert and aware by taking up a meditation practice. It also suggests we shouldn’t rely too much upon computers to make our hard decisions. Keep expanding your consciousness, and enjoy the jet-ski ride!