Do you follow the trends, have the latest gadgets? Do you watch TV, follow the popular shows? Do you believe the things you read on facebook? Are you able to think for yourself? Are you able to reflect and consider, or do you react and follow along? Just how manipulatable are you?

These are important questions to ask yourself in a hot and volatile world that is only getting hotter and more volatile. Global warming and lies. Deception and gain. Greed and death. Ho hum. Change the channel, will you? Oh! You can’t.

49 years ago today the My Lai Massacre brutally took the lives of almost 400 unarmed people—including mothers and babies, and the old. More people were victimized than just those slaughtered that day. Innocence was lost all over the world as news of the atrocity—of the evil committed by good American solders—altered the way we look at ourselves. Group evil was acknowledged due to the My Lai Massacre, and rightly feared. But what has been done since to understand group evil and prevent its recurrence? Apparently, very little.

Since My Lai, the U.S. has been involved in several more bloody conflicts, torture at Guantanamo, and we now send drones to massacre others remotely. Fear is a disease that kills. Too much fear is called paranoia and is treated as a mental illness. But what do we do when those who control a society are paranoid to the point of murder and self-destruction?

“The poor soul” suffers from mental illness, so they aren’t responsible for what they do. There is a mental illness exclusion in the law for responsibility for actions committed by those not in control of their faculties. The “poor soul” had no free will, and so had no responsibility for their thoughts, words, or deeds. If this is true, then perhaps morality really doesn’t apply at all when what we call “evil” occurs. It is a biological issue. But were all of those soldiers out of their minds at My Lai on March 16, 1968? Was the My Lai Massacre an example of biology gone wrong? Did the soldiers have no free will?

Research by Stuart Hameroff, and others, shows there is a biological “component,” but that biology is not the only “cause,” of human behavior. There are many factors that make up the psyche of an individual and contribute to their moment to moment thoughts, words, and deeds. We do have free will, but that doesn’t necessarily mean we understand ourselves well enough to act consciously, or that we are always capable of acting consciously. Maybe we hesitate and wait to see what others are going to do. Maybe we choose to follow along, to allow others to think for us. Maybe we choose to be manipulated.

For example, a few years ago I sat in a room filled with 68 people who had been deliberately pushed to the breaking point. They had been manipulated by techniques meant to enhance competition in order to fill a few job openings with “the best” candidates. They were pitted against each other, and at the same time—contradictorily—required to work together for success. It was an angry and frustrated group of people. Many in the room were certainly thinking, “fuck this shit,” however, only one person actually said the words out loud. The reaction in the room to her words was palpable. Others had to make a decision: join her in her justified reaction to our environment, or face forward and suck up. The outcome of this short story is that she left that day, moments later, without further pay. The remainder of the group, all but 13 of us, were dismissed with two weeks pay the following day. The suck ups got some money, but the truth-teller got to keep her pride. Who was mentally ill? The truth-teller, or those who bit their lips for livelihood, for money, to follow along? How grey is the line between free choice and capacity?

Going along to get along, or to get money isn’t necessarily evil. No one was physically massacred. Yet, isn’t this job vetting experience another example of our general manipulability—our willingness to follow the crowd, to let others think for us?

Most of us have the ability to control ourselves—our thoughts, words, and deeds—in spite of our emotions (through will, or yoga, or biofeedback, or prayer, or other techniques), but that doesn’t mean we understand we have such ability. You may believe that you aren’t able to control yourself, when in fact, you are. Anger management classes presume that we can learn and control our emotions. The law presumes we have free will.

Not everyone involved in the My Lai Massacre went along. For example, Hugh Thompson, a pilot of the 123rd Aviation Battalion of the 23rd American Division, saw the illegal murder of civilians, rescued those he could, and called for assistance. After he reported the atrocities, his higher command rewarded him by sending him on suicide missions! Thompson received both praise and condemnation for his action taken against the wrong-doing, against the “evil” acts being perpetrated.

What is “evil” and what’s the point in calling anything “evil?” If “the poor soul” has no control, if the perpetrator of “evil” is simply a victim of their biology, and therefore not responsible for what they do, then they are not evil. Evil requires an element of control, doesn’t it? A recognition that one could choose to act differently.

Dr. M. Scott Peck asked for a definition of “evil” and got one he liked from his eight year old son: “Evil is live spelled backward.” People who are “evil” are against life. They act with malice and forethought. They manipulate others. They lie. They deceive. They are selfish. Most of us aren’t “evil” in spite of our selfish predilection to go along to get along, in spite of our occasional lies. But where is the line between taking the easy way (instead of the high road) and being “evil?”

Why do the haters and manipulators behave in ways that are against life? Why do others go along to get along? Perhaps there is an innate drive in most of us—or all of us to some extent—to create, to fix, to organize, to have things run smoothly. And there is also an innate drive in others—or in all of us to some extent—to destroy, to disrupt, to create chaos. 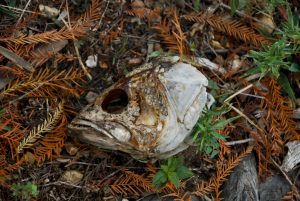 Is “evil” just another form of mental illness? If “evil” is like depression or schizophrenia, are there levels and stages—a spectrum of evil behavior from kinda rotten to truly vile? Is there an opportunity to intervene and treat someone early, preventing “evil?”

1. By diagnosing “evil” as a disease we can begin to study and understand how it manifests
2. After “evil” is understood better, professionals can potentially treat or prevent it
3. Victims of “evil” can more readily heal when they’ve identified/acknowledged their villain
4. Group “evil” can be studied with an eye toward prevention

Most would agree that the murder of almost 400 people is “evil.” But apparently we don’t agree as a society on what constitutes “evil” when it is demonstrated in ways other than cold-blooded murder. Is removing health care options from 20 million people “evil?”

Whether “evil” is a mental aberration, or a moral flaw, when we have people in authority who act against life, who act with malice and forethought to manipulate others and destroy what others find good and helpful, then we have a recipe for disaster. It’s time to wake up and smell the coffee. That’s not sugar in there, it’s arsenic, and we know who put it there.