What is consciousness? Can a computer be conscious? Is your pet cat or dog conscious?

I came to this question of consciousness as part of writing a book about setting intentions. I love to research and I love science. I planned to use current, scientific research to lend credibility to the concept of setting and accomplishing personal, family, and community intentions.

This approach, however, led me to a roadblock. I ran right smack into motionless, dogmatic Materialism. If the materialist conception of the world is correct, then humans have no free will, therefore intentionality, as I intended it to mean in my book, could not be possible. We are nothing but a bundle of neurons, according to the fated materialist view, and each and every thought, act, or emotion is predetermined.

Physicist Daniel Levy asserts that “whatever free will might be, it is a phenomenon of mind, and phenomena of mind must, in my physicalist conviction, be understood in relation to phenomena of the brain.” In his book Neural Holism and Free Will Levy asks: “Shouldn’t this make us despair—this realization that we are automatons with no powers of deliberation, no choices, relentlessly driven to perform mechanically, like a robot or computer? Not in the least. Under the proposed description, our responses (optimally) reflect all of our beliefs and desires, as represented in our neural states.” I don’t know about you, but his explanation doesn’t make me feel all that great; and how does consciousness fit in?

According to neuroscientist Francis Crick’s Astonishing Hypothesis we simply need to locate the area of the brain that controls what we think of as free will to unlock the secrets hidden there in the tissue. Author Stephen Pinker is confident we’ve already located this special spot. Free will, according to Pinker in How the Mind Works, is probably located in the pre-frontal cortex.

If the physical human brain creates consciousness from its algorythmic workings then artificial intelligence—robots with computer brains—could become conscious according to some materialists. Many are working hard and with conviction to find the “singularity”—the tipping point of computation that they believe creates consciousness. The exact amount of computation necessary to flip the switch is unknown. Do you think they will succeed?
In any case, I was stymied in my writing. No free will? Just a pile of firing neurons? Conscious computers? I suddenly desired to research current philosophy and other non-materialistic scientific theories and determine for myself:

Can people set and achieve intentions (outside of the Materialist box) or are we wired and fated from birth?

I felt the need to look beyond simply what “made sense” to a brain that I know is very human, fallible, and misperceiving. After all, I’d just read The Invisible Gorilla by Chabris and Simons, and Denial: Self Deception, False Beliefs, and the Origin of the Human Mind by Varki and Brower and so I was educated (and experienced) in illusion and delusion.

Illusion: “A thing that is or is likely to be wrongly perceived or interpreted by the senses: the illusion makes parallel lines seem to diverge by placing them on a zigzag-striped background” from the Oxford Dictionary online.

Delusion: “An idiosyncratic belief or impression that is firmly maintained despite being contradicted by what is generally accepted as reality or rational argument, typically a symptom of mental disorder” from the Oxford Dictionary online.

Based on these definitions, I may be both illuded and deluded—but mine is not the only misperceiving brain. We all misperceive the world around us. For example, stand 30 meters, or about 98 feet away from your friend and ask them to clap their hands together. Nothing strange happens. But just one step farther away and things go awry and you no longer see and hear the clap at the same time. The 80-millisecond rule, as it is called, skews our perception and sight and sound are no longer synchronized. It’s like watching that bad, late-night movie, or poorly edited YouTube video where the voice lags behind the lips forming the words.

Although about three-quarters of scientists in the early 21st century say they are materialists, that doesn’t mean the dogma of materialism is correct. Not that long ago doctors used blood letting as a routine health treatment, and “cured” syphilis with mercury. The history of science is full of foibles and mistaken beliefs. Astrophysicist Mario Livio points out five big boo-boos in his book Brilliant Blunders. Among the blunders: Darwin’s theory of “blended genes” that lost to Mendel’s laws of inheritance (Mendel’s thinking was derided and dismissed at the time); Lord Kelvin’s relatively young estimate of the age of the earth lost to more accurate radiometric dating that puts the earth at about 4.5 billion years; and Hoyle’s steady-state model of a constant universe lost to the Big Bang theory and an expanding universe. Evolution is a reality, including the evolution of scientific thinking and the practices that come from it (radium cure, anyone?!)

As a linguist studying in the late 20th century, I was excited with our attempts to understand and apply artificial intelligence. We believed decades ago that we were on the verge of thinking, dancing robots. Yet R2D2 was a no-show; all attempts to create conscious computers over the previous 60 years have failed. Physicist David Deutsch in an essay in Aeon magazine said that artificial general intelligence has gotten no closer to its goal than when it began. According to physicist Roger Penrose in The Emperor’s New Mind, we will never create conscious computers.

Wouldn’t you rather have a conscious pet than a conscious computer, anyway? Most of us don’t fear our pets taking over the world! 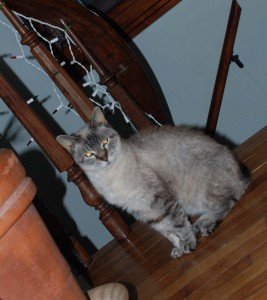 Is your pet conscious? Try this test. Put your cat or dog in front of a mirror every day for a month (place it near their bed or food dish) and let them get used to seeing themselves. Next, put a red dot on their forehead when they are asleep. After they wake up, observe how they react next time they are in front of the mirror. Do they notice the red dot and try to remove it? Some researchers believe that trying to get the dot off is a sign of self awareness, and self awareness equals consciousness.

The positive mirror test has had some interesting results. Here is a list of animals who noticed the weird dot researchers put on their head and tried to remove it: humans (1 1/2 to 2 years and older), chimpanzees, bonobos, gorillas, orangutans, dolphins, elephants, orcas, magpies, and anecdotally, dogs and cats.
Whether or not your pet is conscious, researcher Rupert Sheldrake has clearly demonstrated a telepathic connection between pets and their owners. Dogs know when their owners are coming home, even when those owners return at an unexpected time by unusual transportation. Cats know when their owners are going to take them to the vet. Vets are aware of this and often won’t make appointments for cats! You can join in his fun pet experiment
and explore the telepathic link between you and your pet.

Rupert Sheldrake has also created experiments that demonstrate we can affect things by looking at them. He’s shown that people know when they are being stared at. (You knew this already, didn’t you?) Sheldrake theorizes that we are able to tell when people stare at us, even at a distance through binoculars, because social animals coordinate together not only by communicating messages but instantaneously, as one, due to what he terms the morphic field.
He sees the knowing you’re being stared at phenomena as one example of how our minds extend beyond our brains. Your mind is reaching out beyond your body. By looking at things your mind is touching them. He suggests that our minds are field-like and spread out beyond our bodies kind of like how magnetic fields spread out beyond magnets.

Sheldrake is not a Materialist. He argues that if it is true that your consciousness is a product of brain function, then it follows that it is all in your head! If the materialist view is true, then there must be a little, virtual replica of the real world inside your head. Instead, Sheldrake believes that when you see something the object is where it appears to be because reality is a process that involves your consciousness.

Until recently the term “consciousness” was practically a dirty word in academic circles because it comes a bit too close to the non-materialist concept of “soul” or “spirit.” But the study of consciousness has come out of the closet in a big way and there are now many theories of consciousness. Some of these theories are pretty wild and crazy, but what’s crazier than the fact that we’re conscious of being conscious without a commonly held definition of what it means to be conscious?

Time will tell if materialism will be validated or debunked; though many believe it has already been invalidated by quantum mechanics as demonstrated in the double-slit experiment. The Double-slit experiment shows that matter reduces to quantum waves or potentiality; it establishes a foundation of possibility and the requirement of participation which support the likelihood of free will.

As for me and my book about setting intentions, I’m going to have to keep searching for the “truth” about free will, but in general, I reject materialism because it asserts without evidence that we have none. (How might the application of Law change if we, as a society, acknowledged and acted as though people have no free will? Think about it.)

My intuition says materialism is just wrong, and others—respected researchers and scientists—though in a minority, agree that consciousness is not merely a product of matter reducible to matter. I’ll introduce some of these respected experts and their theories in future blogs and consider further what is consciousness and why it matters—or if it is matter. In the mean time, stare at your cat.